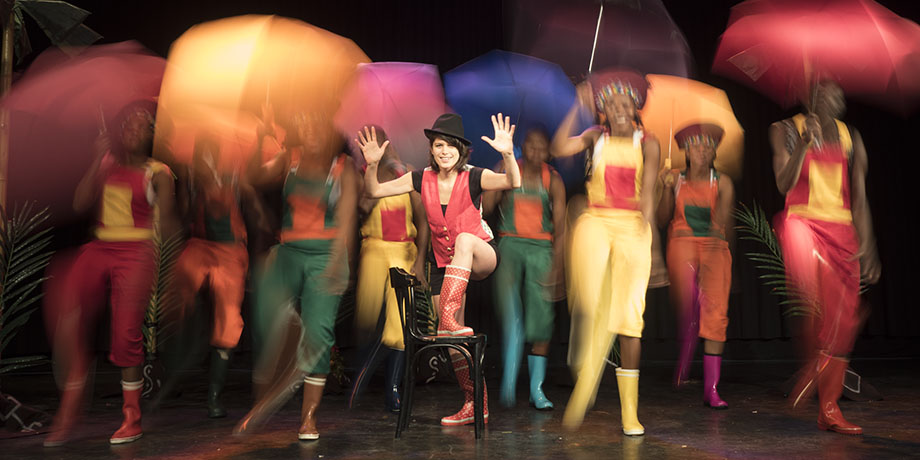 Jombo is in Africa, which is the Gummler in Austria. And this is the story of the Gummler, who learned to dance. Touching, humorous, serious, and playful. A co-production with IyASA/ZIMBABWE.
VideoImages

This play is a cheerful-humorous contrast of Austrian & African folk art. „Amajombo“ means „Gumboot“. „Jombo“ is being used colloquial in South Africa, like „Wellies“. The Amajombo-Dances by the South African mineworkers in Johannesburg are being performed in workwear and Gumboots and show similarities with the „Schuhplattler“ in the Austrian region. So the footgear has a linking function which builds the basics of JOMBO & GUMMLER.
The contrast of Austrian folk art and African Gumboot-Dance (Amajombo) tells us that both dance and music contain shared facets. Since those two dances and style of singing are very similar to each other right up to the yodelling, it is easy for children to embrace the familiarity while taking on something new and unknown.
The play is performed with the IyASA Ensemble from Zimbabwe which invites to sing and clap along with their strong choirs, the pulsating drums and their temperamental dances. The plot is being told in English language. A thrilling Co-production by ThEATRO PICCOLO & IyASA/ZIMBABWE – frisky, humorous, serious & moving, all at a time.

Jombo has completed his service. Together with other worn-out footwear, he lies on the fringes of the desert. He isn’t modern enough for this world and therefor he isn’t allowed to join the game anymore. But Jombo plagues a silent desire; he just doesn’t know what he’s longing for. And because, according to an old belief, shoes are made for walking, he hits the road with his buddies to find his destiny. Their way leads them through a forest full of colorful leaves, deep rivers and abandoned villages until they finally arrive in the city. But Jombo can’t and doesn’t want to keep up with all the rush there and decides to focus on what he and his comrades have always enjoyed doing; stomping – dancing – jumping! And then suddenly he realizes, what he has been longing for all this time…